Every business is striving to get more users be it a startup or a well established business. Further their aim is not just to drive traffic on their site but also want quality traffic that will lead them to create a strong customer base. One of the best ways to boost your conversion rate is referral marketing.

There is a great example of Dropbox referral program, where they increased their conversion rates by 3900%. Therefore, if you also want to grow then use referral marketing that will help you stand out amongst your competitors as long as you do it efficiently. Today, we will be learning about dropbox referral programs and how you can also get started, that involves referral marketing tried and tested strategies.

Before we move ahead and look at the dropbox referral program, it’s important to understand the basics first.

What is referral marketing?

Referral marketing is a kind of marketing where you  make use of word of mouth and recommendations to grow your business’s customer base. All you have to do is to effectively engage your existing customers. In referral your most loyal customers help you spread the word about your brand. In other words, referral marketing lets your current customers become brand advocates.

Why Referral marketing is so effective.

Referral marketing is cost-effective, strong, and trusted. When we have a great experience with a product or service, we’re delighted to—and often do—share it with others.

Now, it’s time to know what dropbox is and how the dropbox referral program leads to immense success.

Dropbox provides file storage and sharing service that delivered its first product to consumers in 2008. When the site started, it reached modest growth – registering 100,000 users by September 2008.

The company acknowledged a few traditional digital marketing alternatives before understanding that referral marketing was already serving them.

How Dropbox referral program worked and how to leverage those tactics.

Step 1. It was part of the onboarding process.

Sometimes the onboarding process can become a matter of concern. Whenever someone starts using software or a service, they are supposed to fill out some details. Dropbox understood this and completed their entire onboarding process in a six-step process and further integrated their referral program as a final step. In the end, they added ‘thank you’ by offering users more of the product.

Step2. People had a clear view of the benefits/rewards.

Drew Houston, founder and CEO of dropbox said that dropbox’s referral program got its inspiration from the Paypal refer-a-friend program. In the PayPal referral program, they rewarded referrals with cash (incentive related to the service), so Dropbox used their product as an incentive in the rewarding system. When someone chooses to use a product, they precisely know what they want from it.

Likewise, in Dropbox’s case, people coveted cloud storage; the more the space, the better it is. Thus to leverage it for their own product dropbox framed the referral program tagline as ‘Get more space rather than using Invite your friends.

Once the user got fascinated with ‘getting more space’, the next step was to make it as simple to share it with as many people as possible. It was obvious that they had to draw their friends on board. The best way to do this is via social media sharing or by just sharing their unique referral link in whatever way they desire (messaging apps, email, SMS, written cards, etc.)

If you want to build a referral program like Dropbox, then make sure you push users to make adequate referrals to accomplish a prized goal.

The simplest way is to make it visible to them how near they are to achieving this goal. Dropbox included a panel that was accessible by users so that they can view how the invites performed.

Dropbox grabbed the WOW moment and offered additional value by inciting users to get more space without paying a dime. Dropbox’s referral program aim was to achieve a more significant audience reach, not a hike in their revenue.

It was a gamble to open their funnel in a very cost-effective method by just showcasing their intention to give more for less.

Now, it’s time to look at the tactics that you can use for your benefit.

Tactics that you can leverage from the Dropbox Case Study

a) Pick an incentive that aligns with your brand.

Dropbox’s referral program was so successful that several brands got inspired and the best example is Paypal. Paypal allowed cash incentives to people who signed up a friend; that makes sense, as Paypal is essentially a peer-to-peer money transfer platform.

For Dropbox, their incentive required to achieve two things: give the participant something they needed, and prove their product efficacy for a large market. Additional cloud storage is a win-win for Dropbox, a referral participant, and their friend. Now, you have to decide what your company can offer participants that deliver value while developing brand loyalty?

b) Make it simple to refer others

Dropbox made it simple for referrers at several key points. Firstly, their CTA was a part of the sign-up process. It asked a user to become a referral participant while they were already enthusiastic about the product and ready to spread the word

Secondly, Dropbox made it possible to encourage your friends and family to sign up without too many clicks. Referral links could be sent via any messenger apps, email, social media, SMS, and more. It even provided them with a way like how to sync your contacts from Gmail, AOL, Yahoo!, and other mail providers to share your link without doing cut and paste individually. This is where a referral marketing software tool can let you set up your campaign so easily

An ultimate component of Dropbox’s campaign is that it contributed to its success: an invite status dashboard. Participants could observe from their Dropbox account how many of their invited friends and family had finished the sign-up process, thereby allowing that participant extra storage. It urged users to follow up on invites or send the link even more often to get even more storage space.

Referral marketing software can make it handy for you. A referral program software like InviteReferrals gives you, the company, a timeline of a participant’s activities: whenever they signed up, who they referred to, and how many referrals converted into customers. You can further share updates to participants telling them about every month’s success or determine the platform to automate rewards.

Dropbox’s referral marketing campaign idea was fantastic. Therefore if you also want to grow like them then all you have to do is to know your audience, providing the right incentive. Further incorporating the right tools lets you manage your referrals as they begin to grow.

Let’s have a look at some important numbers:

Dropbox had a user base of 100K by September 2008, a decent growth considering how contentious the tech marketplace in that period. But between 2008 and 2010, the company’s user base began to double every three months, leading to 2.8M invites sent in April 2010.

The company moved from 100k registered users to 4M registered users. That’s a 3900% growth in the past 15 months! By 2017, they had approximately 34 million users. To top it off, the company was estimated at $10 billion and $1 billion in revenue.

Dropbox set up both side gratifications where the referrer and the referee, the one who refers are both rewarded. Dropbox was expecting to get traction with a new product. It required getting people to sign up for storage space on the cloud.  Its purpose, therefore, was to compensate participants with more free space not just for referring to their friend but also for accepting an invitation.

Apart from referred members getting benefits, the referrer was provided extra storage space. This meant that participants were urged to try the product, realize that it went well, fall in love with it, and then share it with others. The program permanently boosted signups by 60%, with more than 2.8 million direct referral invites sent in the initial 18 months.

We all agree that the Dropbox referral program was brilliant and its learnings are widely applicable to any company. Each and every aspect of the Dropbox Referral Program leads to its growth. but remember that the same formula can fit everyone.

Your efforts must be directed specifically to your product. You can see that only with continuous experimentation and data analysis. 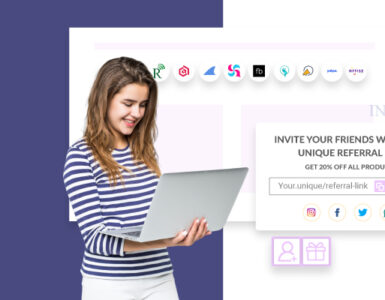 Referral marketing is one of the most effective ways to expand your reach and grow your business in today’s digital world. Not only can you generate valuable leads and conversions through referrals, but it’s also... 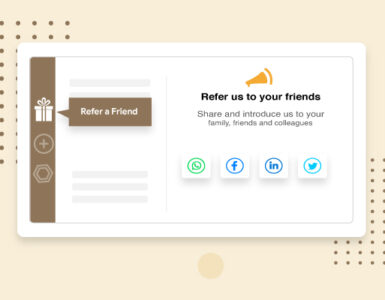 Are you trying to find the best referral tools for 2023? Are you looking to leverage word-of-mouth marketing and expand your reach? If so, then this article is perfect for you. Referral programs are an incredibly... 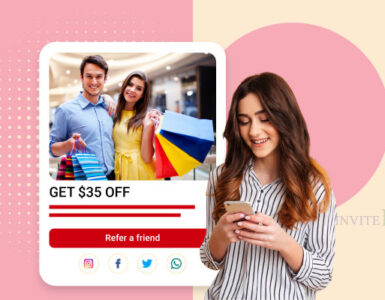 In today’s digital age, businesses must find ways to stand out from the competition and attract new customers. Referral marketing is a great way to do this, and several tools are available to help you get started...